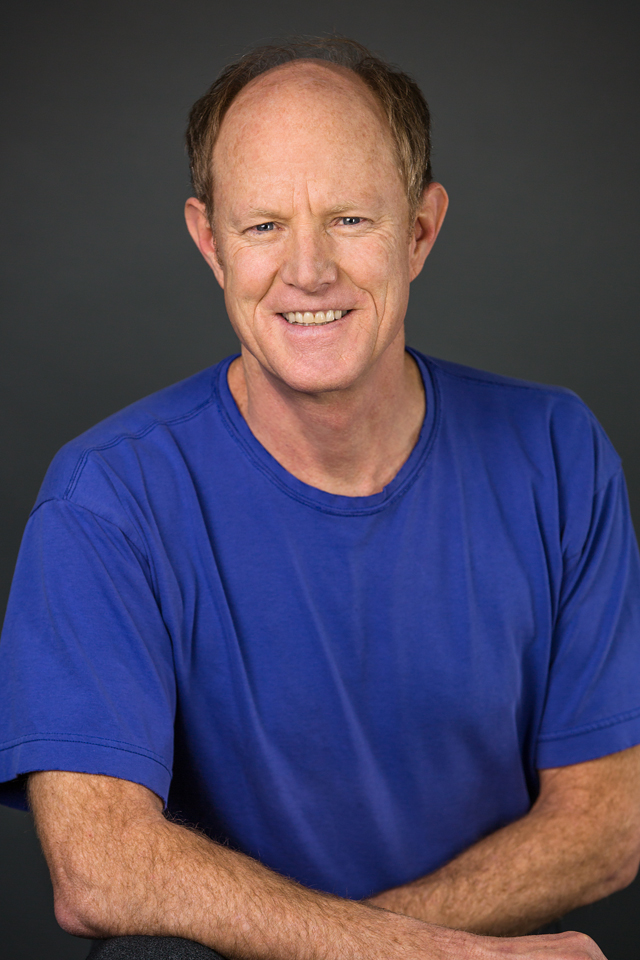 Scientific studies and centuries of experience have demonstrated a regular Yoga practice can result in profound improvements in our lives.

In my Yoga teacher training at The Expanding Light Meditation and Yoga Retreat in 2002, I was taught to connect with my breath at the beginning of each practice session. The teachers said this helps one to quietly go inward, preparing body, mind and spirit to the Asana (yoga poses) that follows. As I studied, I learned much about the relationship between breath and spirit.

In Sanskrit, one of the oldest languages in the world, the word “prana” means life force, energy, and breath. The ancient Greek word “Psychein”, where we get the word “psyche”, means soul or  “to breathe”. In Latin, the word for wind, “anemos”,  is closely related to the words for soul— “anima”—and spirit: “animus”. In Hebrew, the word for breath “ruauch” also means “spirit”.

The Yoga I learned to teach at Ananda is rooted in traditional Hatha Yoga. The Sanskrit word “Hatha” relates to the breath. The “Ha” is for inhalation and the “tha” represents exhalation. In Sanskrit, “hatha” means “now”, as in the first Yoga Sutra of Patanjali: “Hatha Yoga Anusashanum.” Scholars have translated  this in several different variations in English, but it essentially boils down to: “Now we come to the study of Yoga.” This reminds us to pay attention to the eternal moment of our current breath, to stay mindful of each Asana or each activity we are currently focusing on.

The “Ha” aspiration  in the first syllable of “Hawaii” also relates breath or spirit in that native language. The people of Hawaii used the term “Howlie” to describe Captain Cook and the first white people they encountered. It means “the people without breath or spirit.”

I heard the Newe (Shoshone) word “Shun-da-hai” for the first time at my first sweat, led by Western Shoshone Spiritual leader Corbin Harney, in Ruby Valley in 1988. He said the word means peace, blessings, or prayer. Corbin’s prayers always began with an aspirated, audible “Ha”. At sunrise circles, I noticed the Shoshone people blowing (breathing) outward at the end of the prayer. A Numa (Paiute) speaker told me their traditional blessing is “Na-nish-na-heit” (which I’ve spelled phonetically). The “heit” is an exhaled, aspirated sound.

“What is God? God is the breath inside the breath.” –Rumi

Stress is the number one killer of Black men in the United States, and leads to disease and premature mortality in every racial group. Stress contributes to most major health problems such as high blood pressure, heart disease, obesity, diabetes and even cancer. Even people like me, born to more privilege than 95% of the world’s population, live with varying degrees of stress generated by a seemingly endless list of anxieties from finances to relationships to the demise of our planet.

When we perceive danger, the sympathetic nervous system generates commands to the body to prepare it for a critical situation (“fight or flight”). The heart beats faster, blood pressure increases, breathing increases, pupils dilate, adrenaline and cortisol increases. Basically, we get hella fierce. The digestive system shuts down to save food and energy. The limbic section of the brain takes over, which has not evolved since we were reptiles. When we’re triggered in this lizard-brained state, we’re highly susceptible to unskillful behaviors like road rage and pointless arguments.

One of the most pernicious side effects of stress is the elevation of cortisol, known as the “death or stress hormone” for good reason. Elevated cortisol can eat brain and muscle tissue. Elevated cortisol levels also add to unwanted weight gain by stimulating the appetite and ensures efficient conversion of calories to fat, which then tends to get stored in the abdomen.

The parasympathetic nervous system is the other half of our central nervous system. It allows us to rest between stressful “battles.” Because there’s no reason to run or fight, blood flow to the muscles decreases.  Digestive juices flow again. Adrenaline and cortisol secretions are greatly reduced. Blood flow increases to the reasoning centers of the brain. This is why simply stopping to take deep breaths in times of stress can allow us to think more clearly in a critical situation—and why acting when triggered leads to bad outcomes.

The good news is that research on the physiological effects of Yoga shows that we can correct the chronic imbalance in our central nervous system that results from living with too much stress. Scientific studies have demonstrated that by practicing yoga, we generate “feel good” neuropeptides such as serotonin.  A yoga practice also helps improve circulation of lymph and tone the spleen, leading to more efficient removal of toxins and strengthening the body’s immune system.

Yoga is not about flat abs or looking good. It’s more than mere asana (postures) on the mat. The Eight-Fold Path (“Ashtanga”, meaning “eight”) of Yoga laid down in the Yoga Sutras of Patanjali is a 5,000-year old remedy to modern ailments in line with every religious and spiritual tradition I’ve come across, from the Buddhism to the 12 Steps to western religion.

Yoga is not meant to supplant medical science or medical treatment for physical ailments. Be sure to tell your doctor about your yoga practice. At its root, Yoga (from “yoke”, or “union” in Sanskrit) is about self transformation.

The ancient connections between breath and spirit, common to most languages and continents, can be summed up by BKS Iyengar in “Light on the Yoga Sutras of Patanjali”:

The wise yogis studied this connection between breath and consciousness      and advocated the practice of pranayama to stabilize energy and consciousness…Prana is energy, when the self-energizing force embraces the body. Ayama means stretch, extension, expansion, length, breadth, regulation, prolongation, restraint and control. (P.153.)

With gratitude to: Patanjali; Dyksha and Gyandev McCord at The Expanding Light Yoga School at Ananda;  Dr. Timothy McCall, MD, of the Yoga Journal; William Broad (The Science of Yoga); my teachers Robert and Judith Gass, Corbin Harney, Norm DeLorme; and the long line of yoga teachers and students I’ve been blessed to know.

“By your stumbling, the world is perfected.” Sri Aurobindo 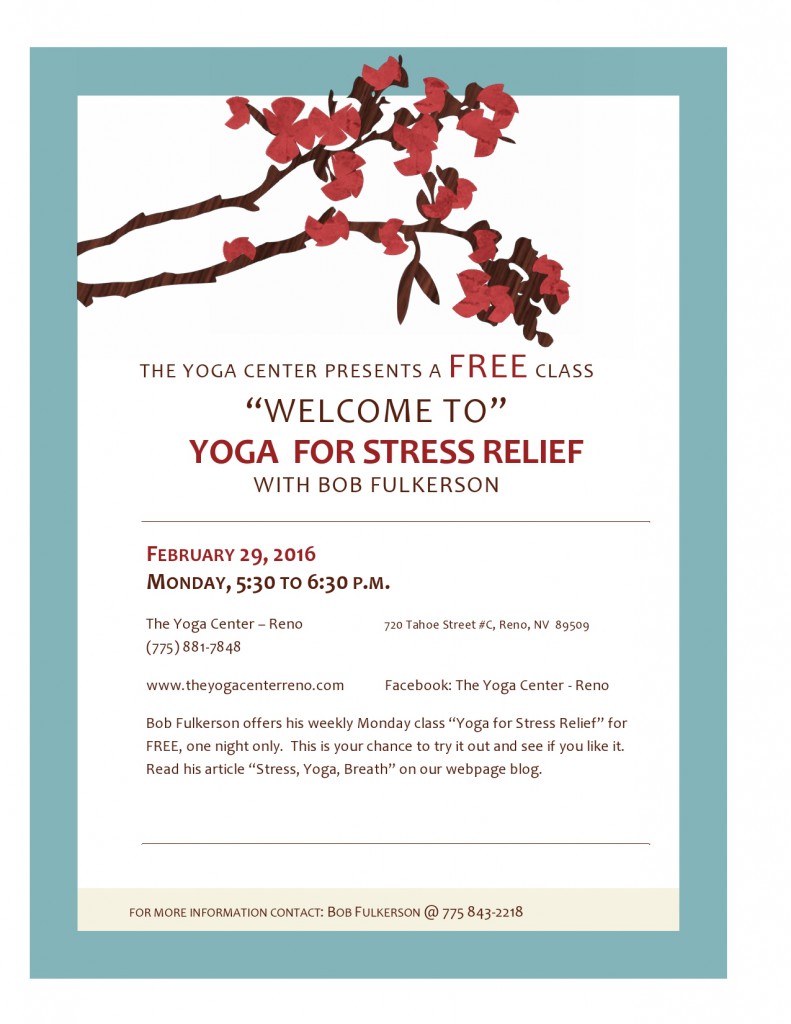 19 thoughts on “Yoga, Breath and Stress”