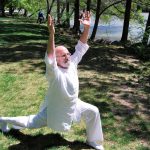 TOD (BACHANSUKH SINGH) SHERMAN, IKYTA: is a KRI certified Kundalini Yoga instructor with a specialty certification in Kundalini Yoga for Stress, Anxiety, and PTSD (Post Traumatic Stress Disorder). Tod began a daily Hatha Yoga practice in 1972, and turned to the practice of Kundalini Yoga as taught by Yoga Bhajan in 2007.  In March 2015, a week after attending White Tantric Yoga in California, Tod had a heart attack.  Released from the hospital in days, Tod attributes his quick healing to his daily Kundalini practice and yogic breath work.  Tod took his Kundalini Yoga Teacher Training in September of that year.  Tod’s beloved wife of 34 years is a veteran who has PTSD, and inspired him to to receive the training and certification for Kundalini Yoga for PTSD at The Guru Ram Das Center for Medicine and Humanology in Santa Fe, while living at the Sacred Home Community of Yogi Bhajan in Espanola.